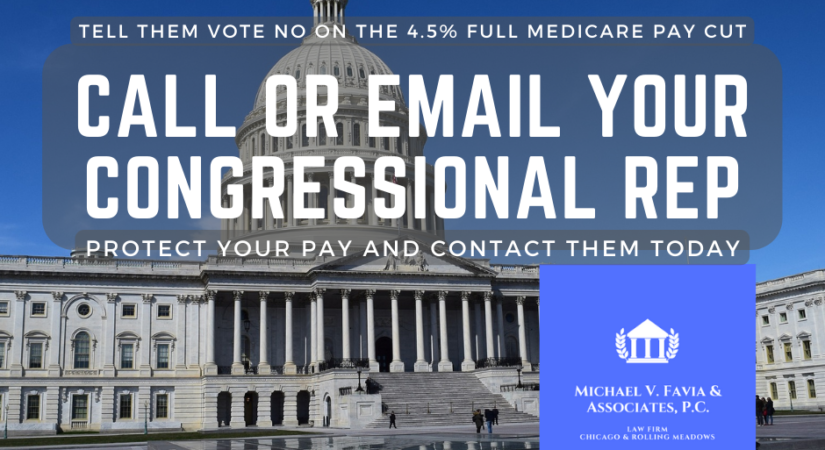 More than 1 million physicians, healthcare professionals, and organizations representing them are telling Congress to act and prevent the Medicare physician pay cuts that are scheduled to take effect on the first of January 2023. Specifically, the scheduled pay cuts need to be removed from the year-end spending bill.

Call, text, email, or make contact in some meaningful way to let your Congressional representative know you are paying attention and are opposed to the 4.5 percent Medicare pay cut, and you want it removed from the year-end spending bill. The representatives and their staff frequently tell the public how much it matters when their records reflect direct constituent input.

Contact Your Congressional Representative: Send Them a Simple Email Today!

In the subject line and the content of the email simply indicate something like “Vote No and Stop the 4.5 Percent Pay Cut.” The staff member who receives and processes incoming emails will likely make a standard reply and your email will be counted in the overall number of responses for and against the spending bill.

Especially with this being a lame-duck Congressional session we expect there to be a back and forth on the year-end spending bill, up to the last moment. The more people who make contact, the more representatives respond to concerns, especially considering a district constituent who takes the time to contact them about an issue is also likely to be active online when the next primary season comes around.

When you call the office of a Congressional representative, you will likely speak to a staff member of that office or might receive voicemail, in which case your call will be returned. When you speak to an office representative let them know very honestly and simply why you oppose the pay cut. At the end of the day, your name may be added to a list of people who made contact regarding this issue. When there is significant news attention on an issue, such as in this case, your phone call is not likely to get much attention,

The omnibus spending bill is the annual year-end bill that needs to be passed to keep the money moving and when these bills are not passed, we experience shutdowns of the federal government. It is something we frequently hear about on the political news, as different efforts are made to change what’s in the spending bill and what needs to go. In this case, the proposed Medicare pay cuts to physicians need to go. Calling on Congress to use its power to stop the bill unless the pay cuts are removed is reasonable and necessary.

Calling Congress This Week and Next; Urge them to Stop the Full Proposed 4.5 Percent Medicare Cuts

During this time, the “lame duck” session of Congress, the end-of-the-year legislative spending package comes up to be voted for approval, and the 4.5 percent physician pay rate cut must be removed from the bill by an amendment striking the cut. Your Congressional representative needs to hear from you.

Physicians do not automatically receive annual inflation updates to Medicare payment rates. “The impending 4.5% Medicare Physician Fee Schedule (MPFS) payment cut comes as medical practices throughout the country are experiencing pressures stemming from rising rates of inflation,” according to the AMA and state medical associations.[i]